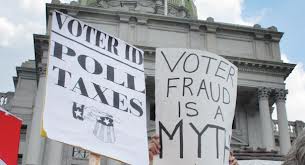 The Washington Post (10/3, Barnes) reports that “a Pennsylvania judge Tuesday ordered state officials not to enforce the commonwealth’s tough new voter ID law in the coming election, saying there was not enough time to ensure that some voters would not be disenfranchised.” According to the Post, “Commonwealth Court Judge Robert Simpson said elections officials could still ask voters for a photo ID, but could not turn away otherwise qualified voters who had not been able to obtain one.” The article notes that Simpson’s decision “that those voters do not have to cast a provisional ballot ‘is what makes this so significant and why we think it’s a real victory,’ said Penda Hair of Advancement Project, one of the groups that challenged the new law.”