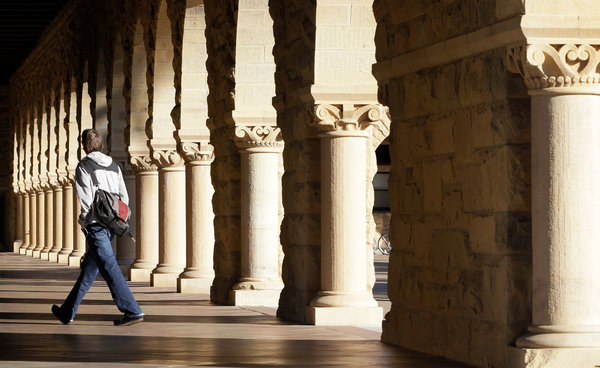 The law school at Stanford University has increased its attention to hands-on training.

Another story today in the NYT about the drop in law school applications. If you live and work in the profession, you could see this coming a mile away. Law schools do not provide the training for new lawyers to believe they can make it on their own. Thus the drop in hiring by larger firms coupled with the absurd rise in tuition has stifled the aspirations of many well suited students. The ABA and our law schools need to wake up before we lose a generation of talent that would otherwise dedicate themselves to helping others through the practice of law.

Such startling numbers have plunged law school administrations into soul-searching debate about the future of legal education and the profession over all.

“We are going through a revolution in law with a time bomb on our admissions books,” said William D. Henderson, a professor of law at Indiana University, who has written extensively on the issue. “Thirty years ago if you were looking to get on the escalator to upward mobility, you went to business or law school. Today, the law school escalator is broken.”

Responding to the new environment, schools are planning cutbacks and accepting students they would not have admitted before.

A few schools, like the Vermont Law School, have started layoffs and buyouts of professors. Others, like at the University of Illinois, have offered across-the-board tuition discounts to keep up enrollments. Brian Leiter of the University of Chicago Law School, who runs a blog on the topic, said he expected as many as 10 schools to close over the coming decade, and half to three-quarters of all schools to reduce class size, faculty and staff.

After the normal dropout of some applicants, the number of those matriculating in the fall will be about 38,000, the lowest since 1977, when there were two dozen fewer law schools, according to Brian Z. Tamanaha of Washington University Law School, the author of “Failing Law Schools.”

The drop in applications is widely viewed as directly linked to perceptions of the declining job market. Many of the reasons that law jobs are disappearing are similar to those for disruptions in other knowledge-based professions, namely the growth of the Internet. Research is faster and easier, requiring fewer lawyers, and is being outsourced to less expensive locales, including West Virginia and overseas.

In addition, legal forms are now available online and require training well below a lawyer’s to fill them out.

In recent years there has also been publicity about the debt load and declining job prospects for law graduates, especially of schools that do not generally provide employees to elite firms in major cities. Last spring, the American Bar Association released a studyshowing that within nine months of graduation in 2011, only 55 percent of those who finished law school found full-time jobs that required passage of the bar exam.

“Students are doing the math,” said Michelle J. Anderson, dean of the City University of New York School of Law. “Most law schools are too expensive, the debt coming out is too high and the prospect of attaining a six-figure-income job is limited.”

“We have been sharply increasing tuition during a low-inflation period,” he said of law schools collectively, noting that a year at a New York City law school can run to more than $80,000 including lodging and food. “And we have been maximizing our revenue. There is no other way to describe it. We will continue to need lawyers, but we need to bring the price down.”

Some argue that the drop is an indictment of the legal training itself — a failure to keep up with the profession’s needs.

“We have a significant mismatch between demand and supply,” said Gillian K. Hadfield, professor of law and economics at the University of Southern California. “It’s not a problem of producing too many lawyers. Actually, we have an exploding demand for both ordinary folk lawyers and big corporate ones.”

She said that, given the structure of the legal profession, it was hard to make a living dealing with matters like mortgage and divorce, and that big corporations were dissatisfied with what they see as the overly academic training at elite law schools.

Debra W. Stewart, president of the Council of Graduate Schools, said applicants to master of business degrees were steady — a 0.8 percent increase among Americans in 2011 after a decade of substantial growth. But growth in foreign student applications — 13 percent over the same period — made up the difference, something from which law schools cannot benefit, since foreigners have less interest in American legal training.

In the legal academy, there has been discussion about how to make training less costly and more relevant, with special emphasis on the last year of law school. A number of schools, including elite ones like Stanford, have increased their attention to clinics, where students get hands-on training. Northeastern Law School in Boston, which has long emphasized in-the-field training, has had one of the smallest decreases in its applicant pool this year, according to Jeremy R. Paul, the new dean.

There is also discussion about permitting students to take the bar after only two years rather than three, a decision that would have to be made by the highest officials of a state court system. In New York, the proposal is under active consideration largely because of a desire to reduce student debt.

Some, including Professor Hadfield of the University of Southern California, have called for one- or two-year training programs to create nonlawyer specialists for many tasks currently done by lawyers. Whether or not such changes occur, for now the decline is creating what many see as a cultural shift.

“In the ’80s and ’90s, a liberal arts graduate who didn’t know what to do went to law school,” Professor Henderson of Indiana said. “Now you get $120,000 in debt and a default plan of last resort whose value is just too speculative. Students are voting with their feet. There are going to be massive layoffs in law schools this fall. We won’t have the bodies we need to meet the payroll.”

A version of this article appeared in print on January 31, 2013, on page A1 of the New York edition with the headline: Law Schools’ Applications Fall As Costs Rise and Jobs Are Cut.