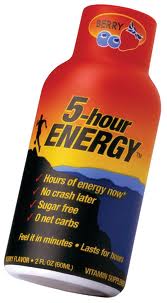 The Wall Street Journal (11/15, Esterl, Subscription Publication, 2.08M) reports that the US Food and Drug Administration on Wednesday acknowledged that it has received reports of 13 deaths during the last four years that may be related to the caffeinated energy drink 5-Hour Energy, which is distributed by Living Essentials LLC. According to the Journal, the FDA has said that there is no evidence so far linking the drink to deaths or hospitalizations, but that the agency is continuing to investigate the reports.

The New York Times (11/15, Meier, Subscription Publication, 1.23M) reports that since 2009, “5-Hour Energy has been mentioned in some 90 filings with the F.D.A., including more than 30 that involved serious or life-threatening injuries like heart attacks, convulsions and, in one case, a spontaneous abortion, a summary of F.D.A. records reviewed by The New York Times showed.” The Times mentions that this disclosure of reports marks “the second time in recent weeks that F.D.A. filings citing energy drinks and deaths have emerged.” The FDA acknowledged last month that it had received five fatality filings mentioning the energy drink Monster Energy.